Low primary turnout presents at least two problems for representative elections and governance: first, fewer voters have a say in choosing their representative; second, those who do vote tend not to have views and preferences that align with those who only vote in the general election or do not participate. In other words, the partisan nature of a party’s primary electorate is usually not representative of the party generally, and especially the district at-large, giving disproportionate influence to a small subset of voters.

Academic literature comparing the ideology of primary voters and general voters is sparse. According to the most recent exit polling on congressional primary voters, the largest ever of which was conducted by the nonpartisan Brookings Institution in both 2016 and 2018, primary voters self-identify as strong partisans.

During the 2018 midterm primaries, the Brookings Institution conducted exit polling of primary voters, with a sample of 13,372 voters across 20 congressional districts where incumbents faced primary challengers. The resulting study by Elaine Kamarck and Alexander Podkul found that primary voters overwhelmingly identified as “strong Democrats” and “strong Republicans” (see Figure 4). They also found that primary voters were much more likely to identify as liberal or conservative than as moderate (see Figure 5). The polarization was asymmetric, though, as the number of “very conservative” Republicans far outpaced the number of “very liberal” Democrats. 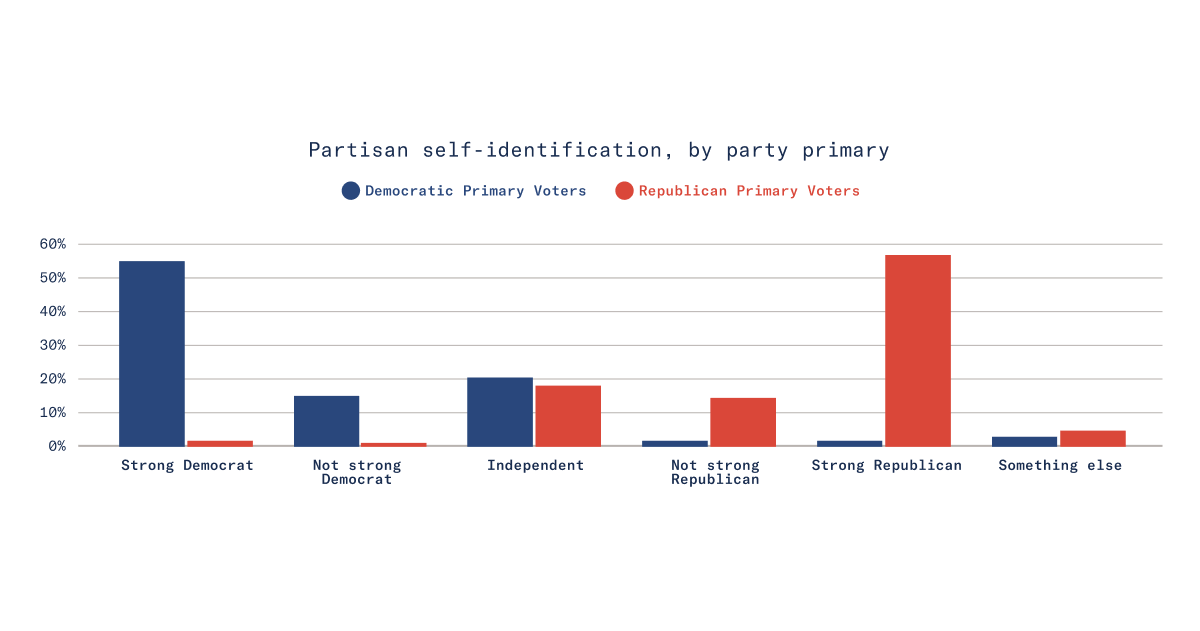 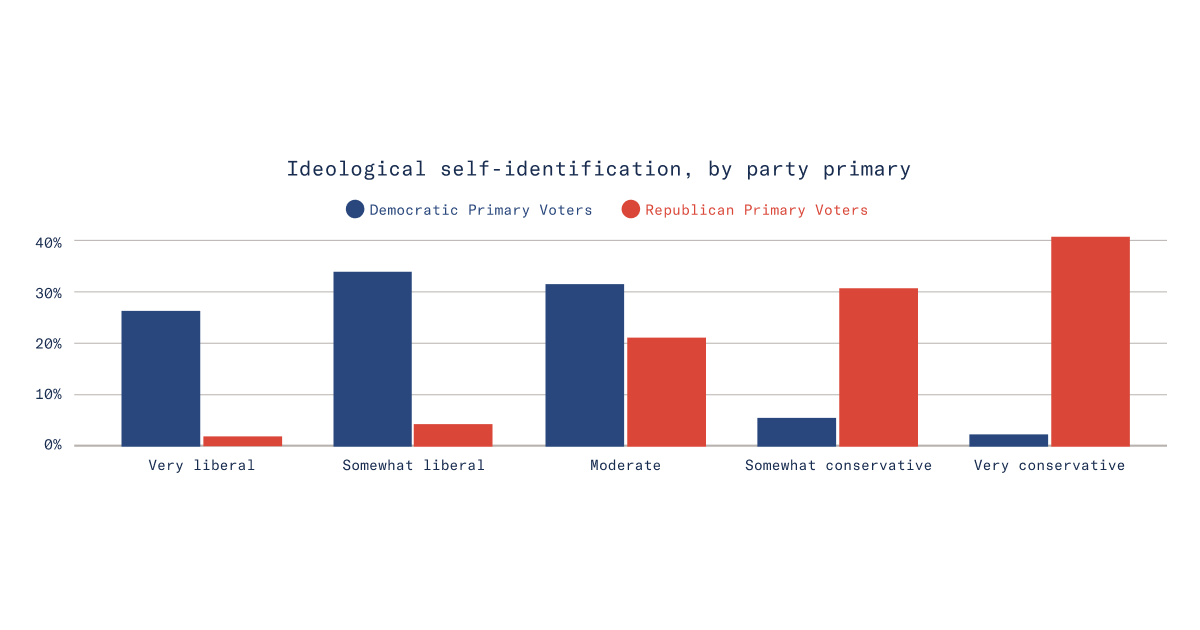 One consequence of low turnout primaries is that incumbents in Congress must appeal to a small and disproportionately partisan sliver of the electorate to get reelected, and will adapt their behavior in office in office to do so.

According to scholars at the R Street Institute and the Brookings Institution, who conducted a thorough review of the academic literature, the fear alone of being “primaried” prompts members of Congress to adapt in three main ways:

“However rare, primary upsets are important because of the psychological impact they have on incumbents. Upsets shape the expectations members have about the future. They have an outsized psychological influence on members precisely because they are so unexpected. Such events thus underscore the uncertainty and exacerbate the insecurity that members regularly face.”

Podkul and Kamarck come to a similar conclusion in their 2018 report:

“[A]n incumbent member of Congress has to worry about getting beat in a primary—even though few of them are. Members’ adaptation to the possibility of a primary challenge means that, in the 21st century, primaries are one of the major contributors to polarization.”

The threat incumbents must be most worried about is the one from the ideological wings of their party. That’s because the voters, donors, and interest groups that are more common and more easily mobilized to support challengers are more likely to rally behind extreme candidates rather than moderate ones.

In particular, elected officials fear that compromising with the other party may open them up to retribution from their primary voters. In an aptly titled book Rejecting Compromise: Legislators’ Fear of Primary Voters authors Sarah Anderson, Daniel Butler, and Laurel Harbridge-Young write:

“Legislators believe that primary voters are much more likely to punish them for compromising than general election voters or donors. This fear of punishment by primary voters leads many legislators to reject compromise.”

The authors surveyed elected officials on the topic. Legislators were much more likely to fear retaliation from primary voters (58%) than from campaign donors (40%) or general election voters (26%) (see Figure 8).

The implication for members from safe seats, especially new and young members is clear: they can keep their seat for as long as they would like, as long as they do not fall out of favor with their party’s primary electorate.

The implication is also clear to more moderate members of both parties, who understand these dynamics and decide not to run in the first place. One study shows not only are there fewer ideological moderates in the Congress today, but moderates are disincentivized from running. The study examined 569 potential future congressional candidates serving in state legislatures and finds ideological conformity or “party fit” influences the decision to run for office, and the polarized state of Congress has left many moderates without a clear home. The author concludes: “The abstention of moderates from the candidate pool — and the selection of ideologues into the candidate pool — suggests that partisan polarization is here to stay.”

Election results from the last two election cycles demonstrate the primary problem well. In 2020, eight members of the House of Representatives lost their primary; five lost to challengers who outflanked them on the far-left or far-right, including three Democrats and two Republicans. Two lost, at least in part, due to election or campaign finance complaints. Rep. Steve King was the only incumbent who lost due to his extremism after years of racist comments, and that was only after the Republican Party stripped him of all his committee assignments.

In 2018, all four incumbents who lost primaries — two Democrats and two Republicans — lost to a more progressive or conservative primary challenger for being out of step with their primary electorates. See Appendix D for a list of all primaried incumbents in 2018 and 2020.

Ultimately, the Primary Problem creates a self-reinforcing cycle of polarization in Congress and in our country.

Boebert, who has been quoted saying she “hopes QAnon is real,” campaigned against Representative Tipton for not being conservative enough and claimed she was more Trump-friendly, despite Trump’s endorsement of Tipton.

Boebert won in a primary that attracted just 19% of the district’s eligible voters — by a margin of 9,761 votes — in what was a major upset against Representative Tipton. Boebert went on to defeat the Democratic challenger in the November general election in the Republican-leaning district.

Following the 2020 general election, the Unite America Institute engaged Citizen
Data to conduct a post-election survey of a representative sample of general election
voters in Colorado’s 3rd Congressional District, oversampling voters in the Republican
primary, to identify differences between the primary and general electorates.

Republican primary voters are nearly twice as likely (37%) as general election voters (19%) to favor uncompromising leaders over those who seek compromise.

The violin chart depicts the distribution of voters’ individual-level ideology scores, based on their expressed policy preferences. One can see how the primary electorate has a much more concentrated distribution at the further right end of the ideological spectrum compared to not only all general election voters, but also Republicans who only participated in the general election.

The disparities in information consumption and policy preference may have important implications for how decisions are made in Congress on behalf of the voters in CO-3. More restrictive immigration policy, and other more extreme positions, are not supported by the district at-large. However, the primary constituency — which clearly has more ideologically extreme policy preferences — is the one that will turn out to vote in the election that matters: the next party primary. 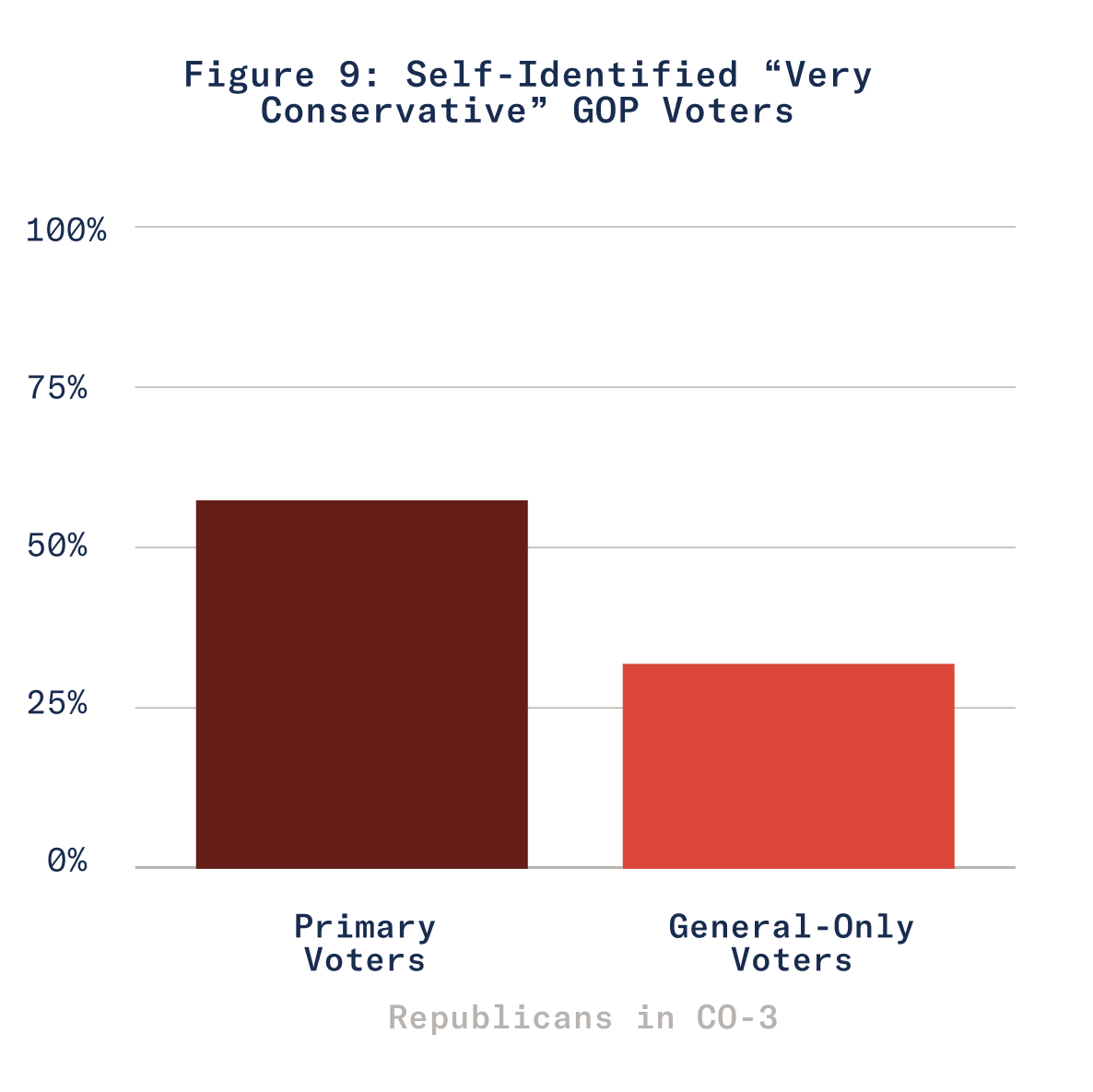 ii. According to DW-Nominate scores, Tipton was more liberal than 62% of Republicans in the 116th Congress, generally in step with his relatively moderate general election voter base.

iv. Respondents were coded on the direction and intensity of their agreement with left-leaning or right-leaning policy statements, placed on a common left-to-right scale, and averaged across the number of policy statements to which they responded to generate a policy preference ideology scale coded from 1 to 5, with 1 indicating the most left-leaning and 5 indicating the most right-leaning. Intuitively, as shown in the figure above, the mean ideology, as measured by this scale of CO-3 (3.01) approximates the theoretical mean value of the scale (3). In contrast, voters in the CO-3 Republican primary appear to lean substantially rightwards by this measure with a mean value of 3.59.