The United States has chronically low voter participation in primary elections. Fewer voters participate in primaries than in general elections due to both electoral rules and the amount of attention primary races attract.

The result is that even in a year of historic voter turnout in the general election in 2020, relatively few voters end up effectively electing most of Congress.

The Mechanics of Primary Elections

Primary turnout can be explained by both environmental and policy variables. Environmental factors include whether there are competitive or statewide races, high-profile ballot initiatives, and/or media coverage that draws awareness to the election. Top policy factors include:

The Primary: The Election that Matters

In 2020, 83% of congressional districts were rated “safe” in the general election, meaning partisan control of the district was all but certain for one political party. Put another way, in a super-majority of districts, the primary is the election that actually determines who is elected, and specifically, the primary of the dominant party.

Districts are safe for one party or the other because of both voters geographic self-sorting and partisan gerrymandering. For example, in 2016, Secretary Hillary Clinton won the national popular vote while only winning a majority of votes in just 659 counties; President Trump won 2,584. In 2020, urban voters identified as Democrats (62%) twice as much as they identified as Republicans (31%); likewise, rural voters were more likely to identify as Republicans (58%) than as Democrats (35%).

The consequence of geographical sorting of the electorate along partisan lines — which has only increased in the last two decades — is that very few places are competitive between Republicans and Democrats in general elections.

In addition, some districts are safe because of the practice of gerrymandering — in which politicians “crack” and “pack” voters in districts to give themselves an electoral advantage and minimize the number of competitive districts. The role gerrymandered districts play, though, is often overstated. Models built by FiveThirtyEight to optimize the compactness of districts would only recover roughly 30 of the more than 90 districts that have become uncompetitive over the last 25 years. As political journalist Henry Enten put it:

“People are changing their political opinions to be more like their neighbors’, and people are moving to regions where their political viewpoint is more common. This “self-sorting” means more and more areas come, in essence, pre-gerrymandered — dominated by partisans. That makes it more difficult to draw competitive districts without an increased effort to do so.”

The sorting of the electorate along party lines, along with voters’ increasingly partisan voting habits, makes it easy to predict who will win in the general election. In 2020, FairVote, a leading nonpartisan reform organization, accurately predicted the winner of 357 congressional seats with 99.7% accuracy, relying solely on prior voting patterns of the district (rather than polling or other inputs).

“The ability to project more than four out of five seats without knowing anything about the candidates, their campaigns, or the nature of the year, with a high degree of success, is a powerful demonstration of how winner-take-all elections have effectively removed most representatives from any sort of accountability to the general election voters.”

Because America’s electorate is so geographically sorted along partisan lines, few general elections are competitive. In turn, despite abysmal turnout in partisan primaries, they effectively serve as the decisive election in determining who represents most Americans in Congress.

These partisan primaries disenfranchise voters. The problem is not only that nearly 11 million independent voters cannot participate in the primaries (see Figure 1); the problem is also that Republican voters in reliably Democratic districts and Democratic voters in reliably Republican districts have little to no say in who represents them. As Figure 2 shows, only 22 states have primaries truly open to all voters.

Though turnout in the 2020 general election shattered records at 67%, a supermajority of Congress had already been elected in the primaries. As our analysis found, only 10% of eligible Americans cast votes that mattered in partisan primaries that effectively decided 83% of seats (361).

We collected data on voter participation in every congressional district primary in 2020. We found:

Our topline finding from this report — that only 10% of voters effectively elected a supermajority of (83%) Congress — combines the first three data points. Of 234.9 million eligible voters, only 23.4 million cast ballots (10%) in primaries that effectively decided the outcome of 361 Congressional districts (83%). 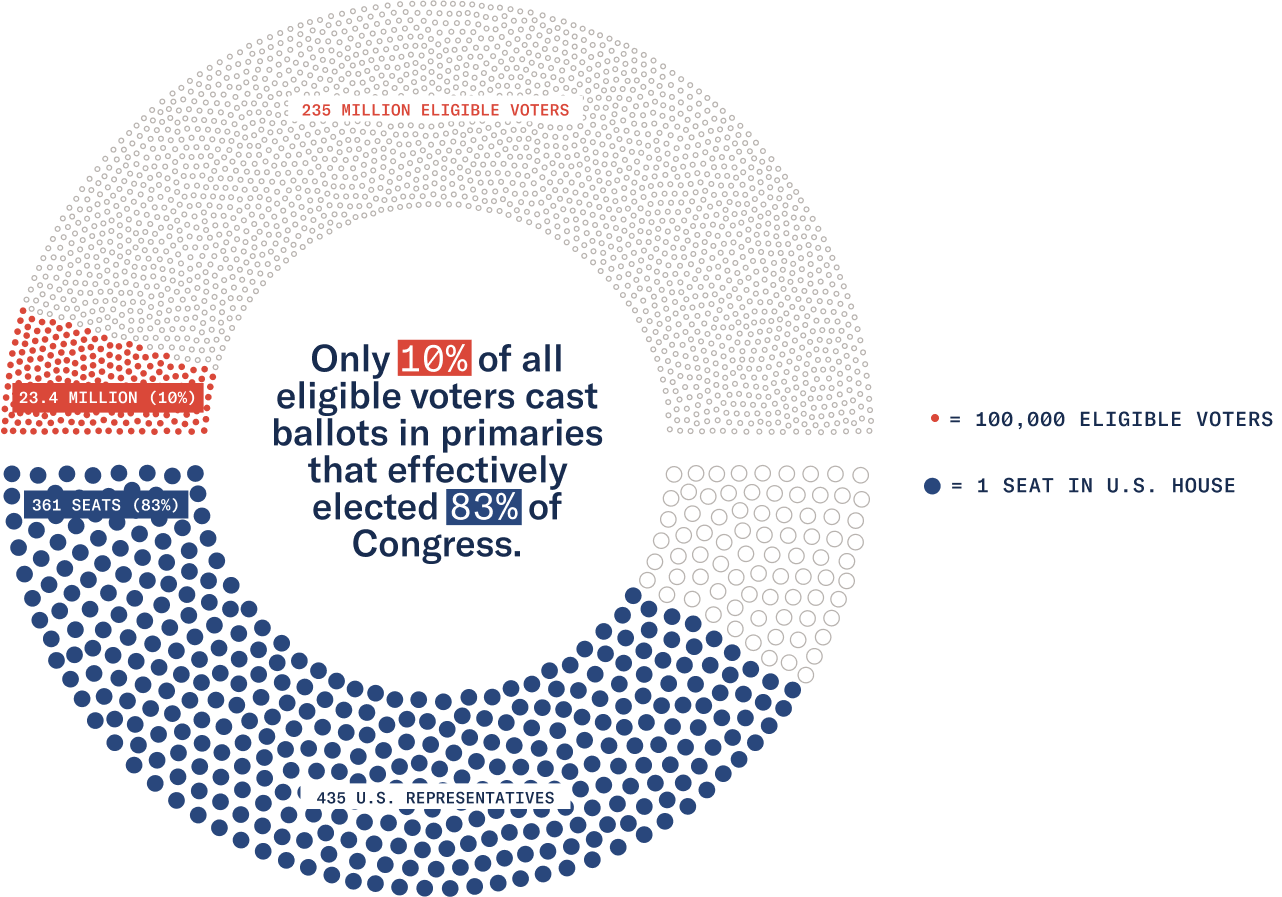 The Primary Problem in Action

In 2018, Alexandria Ocasio-Cortez challenged incumbent Democrat Representative Joseph Crowley in New York’s 14th Congressional District, which has a partisan voter index (PVI) of D+29. Rep. Ocasio-Cortez won the closed party primary by a 13.4% margin with just 16,898 votes in a district of more than 390,000 eligible voters. Then, in the general election, Ocasio-Cortez won the reliably blue district with over 110,000 votes, a margin of 64.6% over the Republican challenger. The primary contest was the consequential election given the partisan make-up of the district; in effect only 4.3% of eligible voters in the district voted for Rep. Ocasio-Cortez in the primary.

In 2020, Madison Cawthorn and 11 other Republican candidates ran in North Carolina’s newly vacated 11th Congressional seat with a PVI of R+11. In the March primary, Cawthorn received just 18,418 votes, 20.4% of all votes cast in the primary. He trailed Lynda Bennett by just a few thousands votes, but because neither candidate received 30% of the vote, a runoff ensued. Turnout in the runoff diminished by nearly half, which Cawthorn won; he prevailed with 30,004 votes, equal to just 5.0% of the district’s voting age population.

In addition to the fact that too few voters have a voice in primary elections, winners often emerge with less than majority support from the few who do show up. In 2020, of the 161 partisan primaries in safe districts with at least two candidates, a quarter (26%), were won by a candidate who did not receive majority support. This happens when votes are split among candidates, making the actual number of votes needed to win in some districts an extremely low plurality (see Figure 3).

The impact of the Primary Problem is even more pronounced in multi-candidate races as candidates can prevail by appealing to an even narrower slice of the primary electorate. In addition, in such races, votes can be split between candidates who are most similar. For example:

Partisan primaries are all the more consequential because most states (47) expressly prohibit candidates who lose primary elections from appearing on the general election ballot as a third party or independent candidate. A majority of these so-called “sore loser” laws were adopted between 1970 and 1995.

For example, in 2010, incumbent U.S. Senator Mike Castle (R-DE) lost to Tea Party challenger Christine O’Donnell by under 3,000 votes in the Republican Primary: he was prohibited from running in the general election, though may have been a competitive candidate (O’Donnell subsequently lost in the general).

Not only do such laws limit voter choice, they also contribute to polarization. Researchers have found that these provisions alone “account for as much as a tenth of the ideological divide between the major parties.”

Congressman “Primaried” by 0.4% of His District

Former Congressman Denver Riggleman’s (R-VA-05) 2020 primary loss is particularly notable given the nature of the election. Rather than a primary, the Republican Party opted to use a closed convention whereby only 2,500 delegates participated by casting ballots from their cars in a church parking lot. Riggleman lost by a margin of 8% and was tossed out of office “largely because he officiated a same-sex wedding last summer,” according to The Atlantic. In effect, just 0.4% of the district’s eligible voters elected Rep. Bob Good, Riggleman’s challenger, though over 69% of voters cast ballots for the seat in the general election.

Riggleman reflected on his loss:

“I’ve learned the hard way through my own political career that Democrat and Republican political party machines exert their own perverse influence on our already broken primary process. These machines make money off of the political process, and they’ll only nominate the candidates that they think will play ball with their money-making schemes.” 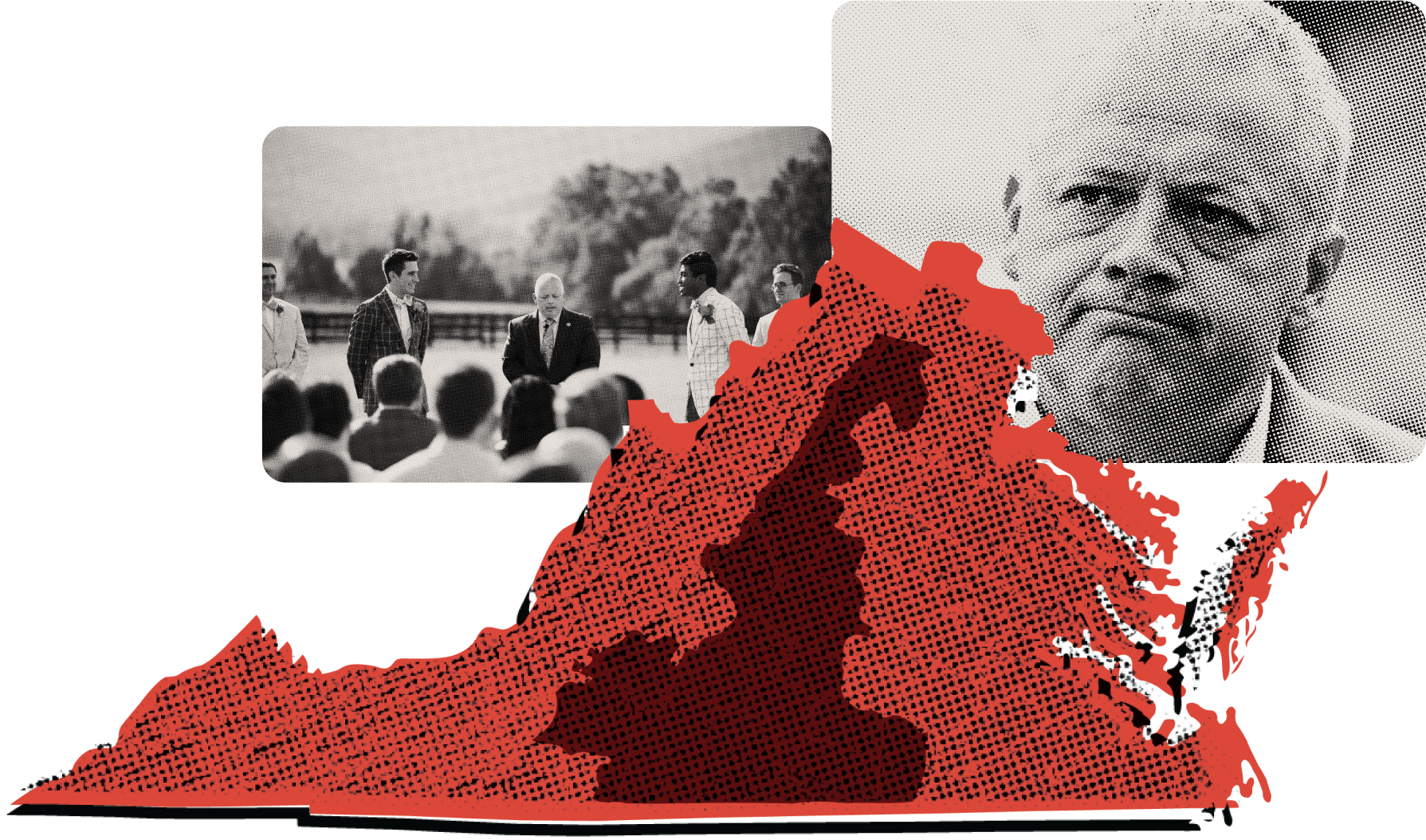 i. The number of voters participating in primaries is dramatically lower in midterm election years. A report by the Bipartisan Policy Center found that in the last three midterm elections (2010, 2014 and 2018), the average turnout of eligible voters in either Republican or Democratic primaries has never exceeded 10 percent. See: “2018 Primary Election Turnout and Reforms,” Bipartisan Policy Center (November 2018).

ii. Even in 2020, a high-profile presidential election year, an estimated 25% of eligible Americans participated in primary elections for Congress, up only slightly from 20% in 2018.

iii. For more information about each primary type, see Appendix B.

vi. We define “safe districts” by excluding general election contests rated as “Toss Up” or “Lean” by Cook Political Report and also excluding top-two nonpartisan primaries in which the general election was contested by two members of the same party.

vii. We define the “dominant” party to be the party with a significant advantage in party affiliation among voters in “safe” districts.

viii. To determine turnout, we divide the number of people who cast a ballot in an election by the Voting Age Population (VAP) because (i) VAP is the best available denominator reported by congressional district (ii) VAP represents the total share of voting age Americans.

ix. No candidate received 50% of the necessary vote to win the nomination in the primary. Greene later defeated second place finisher John Cowan in a runoff election.

9 Wasserman, David. “Purple America Has All But Disappeared,” FiveThirtyEight (March 2017).