A. Complementary Reform: The Full Suite of Policies to put Voters First

The most direct way to address the primary problem is to replace partisan primaries with nonpartisan primaries. Still, other reforms are complementary in nature and, as a whole, can foster even greater participation, competition, and accountability in our elections.

Congressional district maps have an impact on primary outcomes — long before any votes are cast — especially under the current single-member, plurality election system. When the decennial task of redistricting is left to partisan hands, the manipulation of districts to serve political interests devalues the influence of voters in elections.

Independent redistricting commissions would help take the party politics and special interests out of the map making process. Allowing citizens a voice in the map making process through redistricting commissions — as states such as Arizona, California, Colorado, Michigan, and most recently, Virginia have done — helps ensure districts are competitive, and representative of the people they comprise.

Vote at home systems boost voter turnout, including in primary elections. Allowing voters the opportunity to vote at home gives voters maximum flexibility, with multiple methods to return their ballot securely and safely, while also providing the opportunity to research candidates and make informed choices.

Ranked choice voting gives voters the option to rank their candidates in order of preference — giving them more voice, choice, and power in the political process. If no candidate receives a majority of first place votes, the last place candidate is eliminated, and votes cast for that candidate are  transferred to voters’ next place preference. The process is repeated until a candidate has truly earned majority support. In doing so, ranked choice voting levels the playing field for independent and third party candidates by eliminating the “spoiler effect.”

B. An Incremental Step: Open Primaries

Today, 10.6 million voters are prohibited from participating in party primaries. That’s because ten states do not require parties to allow independents to participate in taxpayer-funded and government-run primary elections, and in turn, many state parties do not allow their participation.

Though nonpartisan primaries are an ideal reform, “semi-open primaries,” which allow unaffiliated voters to participate in the party primary of their choice, are an incremental step to increase participation and encourage candidates to appeal to a broader cross-section of the electorate.

Ideally, partisan primaries would not just be open to independent voters, but they would also be open to all voters. That is — as is the case in 17 states — Republicans should be able to participate in Democratic primaries, and vice versa. Such a policy best enables voters to participate in the primary that matters most, especially in safe districts. 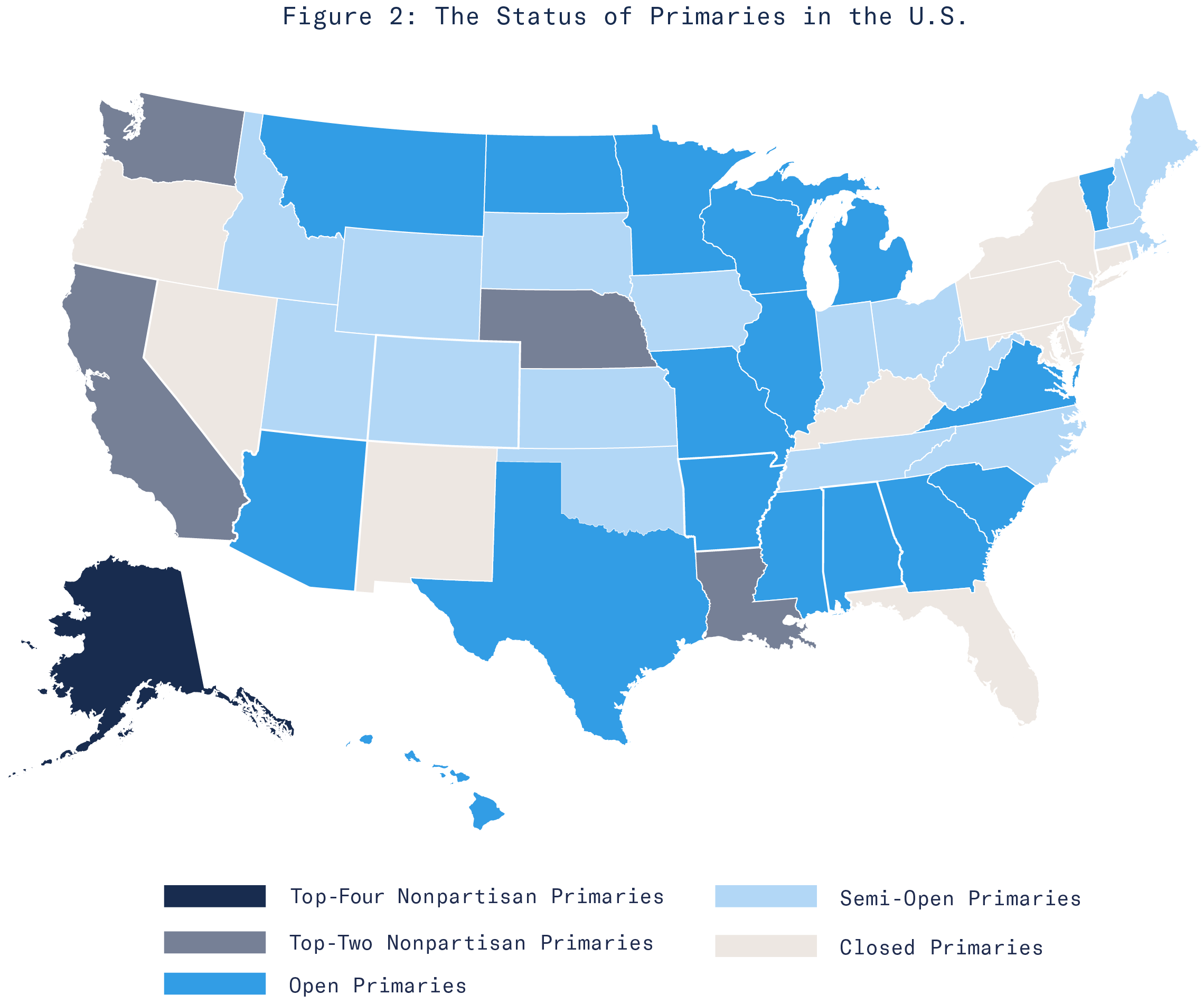 The United States’ direct party primary nomination process is unique for two reasons: first, it’s not a process prescribed by the Constitution; and second, the United States is the only democracy where parties nominate candidates through direct primaries.

Primary elections trace back to the Progressive Era, a time of robust political innovation which sought to reinvigorate democratic processes and give move power to the people. In 1904, Wisconsin became the first state to adopt a statewide direct primary election; by 1917, 32 other non-southern states followed suit. The reform was in response to a growing practice by which local party bosses controlled the nominating process, giving voters virtually no influence in who appeared on their general election ballot and stifling competition.

While the Progressive Era reform had the intent of taking candidate selection away from party bosses in smoke-filled back rooms, it also had the impact of disenfranchising many voters. Academics note there were significant variations in the politics and adoption of direct primaries in states throughout history.

For example, the history of primary adoption in southern states suggests it may have intended to keep Democrats in power, at the expense of racial minorities’ participation in the political process. Southern states, therefore, are excluded from our count of those adopting a Progressive Era reform in a short period of time, even though they did begin to adopt primaries, including jurisdictions in South Carolina as early as 1896. Often referred to as “white primaries,” the implementation of primaries in many southern states explicitly barred people of color from participating in primaries, which was the only competitive election given the Democratic Party’s dominance in the region. There were several cases challenging the legality of the practice leading up to the 1944 Supreme Court decision in Smith v. Allwright, pursued by the NAACP, which declared all-white primaries unconstitutional in violation of the Fourteenth and Fifteenth Amendments.

The efforts of white Democrats in the South to exclude people of color from participating is an example of a previous version of the Primary Problem: when the rules restrict who can participate in what primaries (distorting the makeup of the electorate), elected officials are not incentivized to represent all of their constituents.

Efforts to close primaries today may have the impact of keeping people of color out of the dominant party’s primaries. States like Missouri and South Carolina have sought to require voters to declare their party affiliation when they register to vote. In the South, the Republican party primary is often the one that matters, but people of color overwhelmingly register with the Democratic party or as independents. As a result, the closed party primary structure has the impact of disenfranchising key voices.

In 1934, Nebraska moved to elect legislators to its unicameral legislature through a top-two nonpartisan primary structure. The next move to a nonpartisan primary did not happen until 2004, when Washington voters passed Initiative 872 to implement a top-two system for congressional and state elections. Though litigation ensued, by 2008 the Supreme Court ruled against state parties and declared the initiative constitutional: In affirming the court’s 7-2 ruling with the majority opinion in Washington State Grange v. Washington State Republican Party, conservative Justice Thomas wrote parties are still free to hold their own nominating processes, but that “the First Amendment does not give political parties a right to have their nominees designated as such on the ballot.”

In 2010, voters in California passed Proposition 14 to bring top-two nonpartisan primaries to the state: the first election under the new system was held in 2012. In 2020, Alaska voters approved the first ever top-four nonpartisan primary system which will be paired with ranked choice voting general elections for all state and federal offices starting in 2022.

According to the Brookings Institution, 46 congressional incumbents have lost primary elections since 2004. See Figure 14 for the number of losses over the last two decades, and Figures 15 and 16 for details on losses in 2018 and 2020, respectively.

House Incumbents Who Lost Renomination in 2020

House Incumbents Who Lost Renomination in 2018

House Incumbents Who Lost Renomination in 2020

The best proxy for congressional or state legislative district voting-eligible population turnout rates is citizen voting-age population turnout rates, which can be obtained from recent American Community Survey data. ACS extracts of citizen voting-age population estimates by racial and ethnic groups for many geographic levels including congressional and state legislative districts… CVAP is the best proxy for VEP since there is no easy method of apportioning correctional populations to districts.

VAP estimates for congressional districts were obtained from the Census Bureau’s 2019 American Community Survey data. Though one might argue registered voters is an important factor, including all age-eligible voters in turnout calculations is a more holistic way to determine turnout as a measure of total, otherwise-eligible voters who are not registered.

Using party registration figures would reward states who limit primary eligibility to only those voters who have officially registered with a party. We do not see value in reporting high turnout for a state simply because the pool of eligible voters is restricted compared with other states.

For every U.S. House race in 2020 (435), the Unite America Institute collected the following data points into a new dataset in order to inform our research:

The Unite America Institute is a nonpartisan, nonprofit organization that conducts research and provides analysis on the root causes, effects, and potential solutions to political polarization and partisanship.

This report was written by Policy Manager Beth Hladick and Sr. Director for Policy & Partnerships Tyler Fisher with editing by Sr. Communications Manager Brett Maney. We are especially thankful for the data collection work done by our interns, Oliver Hirshland, Adrian Gonzalez, and Nicolette Kolpakov. Our research was informed by many practitioners working in the field, and we are grateful for the comments from Lee Drutman (New America), Mindy Finn (Citizen Data), Christian Grose (The Schwarzenegger Institute), Sol Lieberman (The Institute for Political Innovation), John Opdycke (Open Primaries), the Hon. Jason Altmire, and Robbie Robinnette.

i. Prior to the reform, unaffiliated voters had to declare to be a Republican or a Democrat within 30 days of the primary election in order to cast a ballot. According to the Secretary of state, between 2010 and 2016, a combined 39,831 unaffiliated voters participated in primaries by registering to receive a ballot.

ii. In 2000, the Supreme Court initially ruled California’s blanket primary system unconstitutional in California Democratic Party v. Jones. In later considering Washington state’s primary system, the court claimed that unlike California’s primary, the Washington system did not prescribe a method to choose the parties’ nominees. The election regulations instead provide that the primary does not serve to determine the nominee of a political party, but serves to winnow the number of candidates to a final list of two for the general election.

iii. In 16 states, voters are not allowed to cast a ballot where only one candidate has filed. According to the Bipartisan Policy Center, In the 2018 midterm cycle, states that allowed voters to cast ballots in all contests averaged 5% higher turnout than states that only allowed voters to vote in contested primaries. Allowing voters to register their disapproval of uncontested candidates can spur additional competition in future elections and boost turnout.

44 Vault, James. “Independent Redistricting Commissions and Electoral Competition in the US House of Representatives.” Open Journal of Political Science 9 no.1 (January 2019): 1-16.

47 “The State of Reform: An Analysis of the Impact and Progress of Four Key Political Reforms,” Unite America Institute (June 2020).

51 Donovan, Todd, Eric Lawrence and Shaun Bowler. “The Adoption of Direct Primaries in the United States,” Party Politics (May 2011): 3-18.