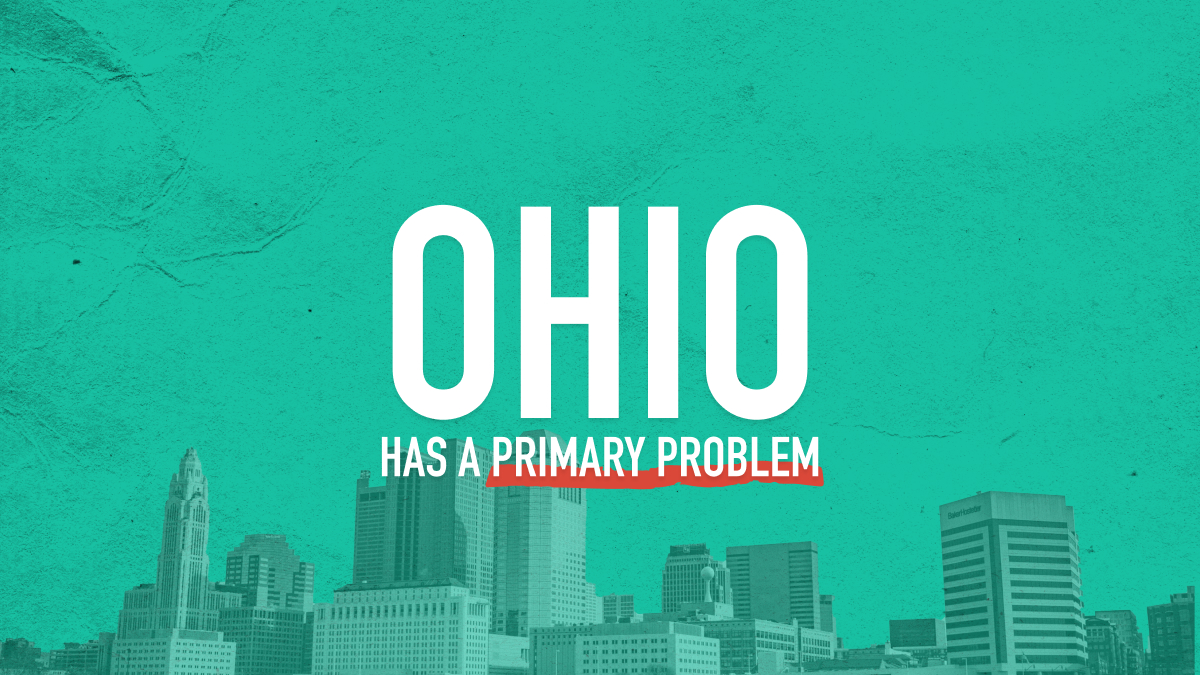 The topline: After months of controversy around the state’s Republican-drawn maps, Ohio is charging full steam into their primary races — where 12 of 15 congressional districts are considered “safe” for one party, which means the primary is the election of consequence in determining who will represent the district in Congress.

After a trickling start with Texas’s March primary — where 36 of the state’s 38 congressional seats have likely been decided because of the Primary Problem — the race for control of Congress kicks off in earnest in just a few days. May is chalk full of primary elections (in 13 states to be precise), including in key swing states such as Ohio (May 3rd) and Pennsylvania (May 17th).

The Primary Problem is about to rear its ugly head in Ohio in a huge way. The majority of Ohioans will have their congressional representation decided by the handful who vote in the dominant party primary.

“It has gotten harder and harder to break through the partisan gridlock and make progress on substantive policy.” – Sen. Rob Portman

“... the current state of our politics, especially many of the toxic dynamics inside our own party, is a significant factor in my decision.” – Rep. Anthony Gonzalez

As an aside: Gonzalez was one of 10 House Republicans to vote for impeachment — all of whom have now announced their retirement or face significant primary challenges.

The Primary Problem facing Ohio exists in almost every other state, including others holding elections in  May.

For example, in Oregon and Pennsylvania’s May 17th primary, more than 1 million non-affiliated voters in each state will be barred from participating in any election thanks to closed primary systems.

Runoff elections in Texas will require voters to return to the polls on May 24th to vote again in 15 races from their March 1st primary. Just 6% of Texans participated in the first round primaries that will help to elect 94% of the state’s congressional delegation.

But it’s not all doom and gloom: four states — including Alaska, California, Louisiana, and Washington — use alternate primary systems that welcome participation from all voters (regardless of partisan affiliation) and encourage candidates to campaign to the broadest swath of their district. On May 11th, voters in Nebraska will elect candidates to their unicameral legislature through a nonpartisan, top-two primary. California (June 7th) and Washington (August 2nd) also use top-two systems for all state and federal offices.

Nonpartisan primaries solve the Primary Problem by putting all voters on equal footing, giving every voter a voice at every step in the election process, and rewarding candidates who best represent the views of their constituents. Other states would be smart to follow suit.